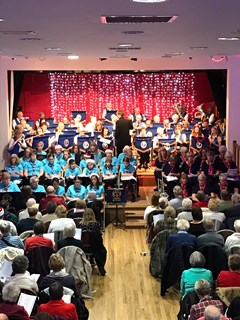 Rustington Parish Council once again hosted a feast of festive music and merriment at its annual Community Carol Concert, on 14 December. Entry was free, as were the refreshments for those attending. Everyone received a programme, which contained a lucky number for the Grand Draw, which saw in excess of 70 donated prizes being given to members of the audience.

Whilst the weather played a part in deterring some regulars from attending the Concert, the Village Memorial Hall at The Woodlands Centre, was still almost full to capacity, for this, almost always, well attended, Community Event.

The audience was treated to harmonious singing from both the Sussex West County Guide Choir and the Friendship Singers.

The Littlehampton Concert Band not only accompanied the Christmas Carols, but also performed its own enchanting selection of festive music to the delight of everyone present.

Councillor Andy Cooper, again, assumed the role of Compere for the evening, and there was a special most contribution selected and delivered by the Vice-Chairman of the Parish Council, Councillor Mrs Alison Cooper.

The Retiring Collection raised just over £437.00, which will be donated to the Chairman' chosen Charity, Turning Tides.

All of the donors of prizes for the Lucky Programme Draw and items for the Charity Auction which included a Home Monitoring & Control Kit, Bluetooth Hifi System, Plant Arrangements, Bird Table complete with Seed, Tickets for the i360 in Brighton and a Luxury Men' Hair Care Kit and Haircut that had been most generously donated by Arun Business Supplies, Barkers Electrical of Rustington, British Airways i360, Clipper Street Barbers, Collins Carpets and Flooring, Country Life Pet Supplies, Ferring Nurseries, The Honeypot Cafe and Sigma Plumbing.  A financial donation of £90.00 was also received from Briggs Electrical. This resulted in an additional £330.00 being raised for the aforementioned Charity.

Councillor Mr Jon Street, Chairman of the Council, said that the Concert had as always, been a most successful Event, not only for the audience, but for the performers alike. He expressed his thanks and appreciation, on behalf of not only the Council, but also himself, to all of the performers and those responsible for organising the Event.