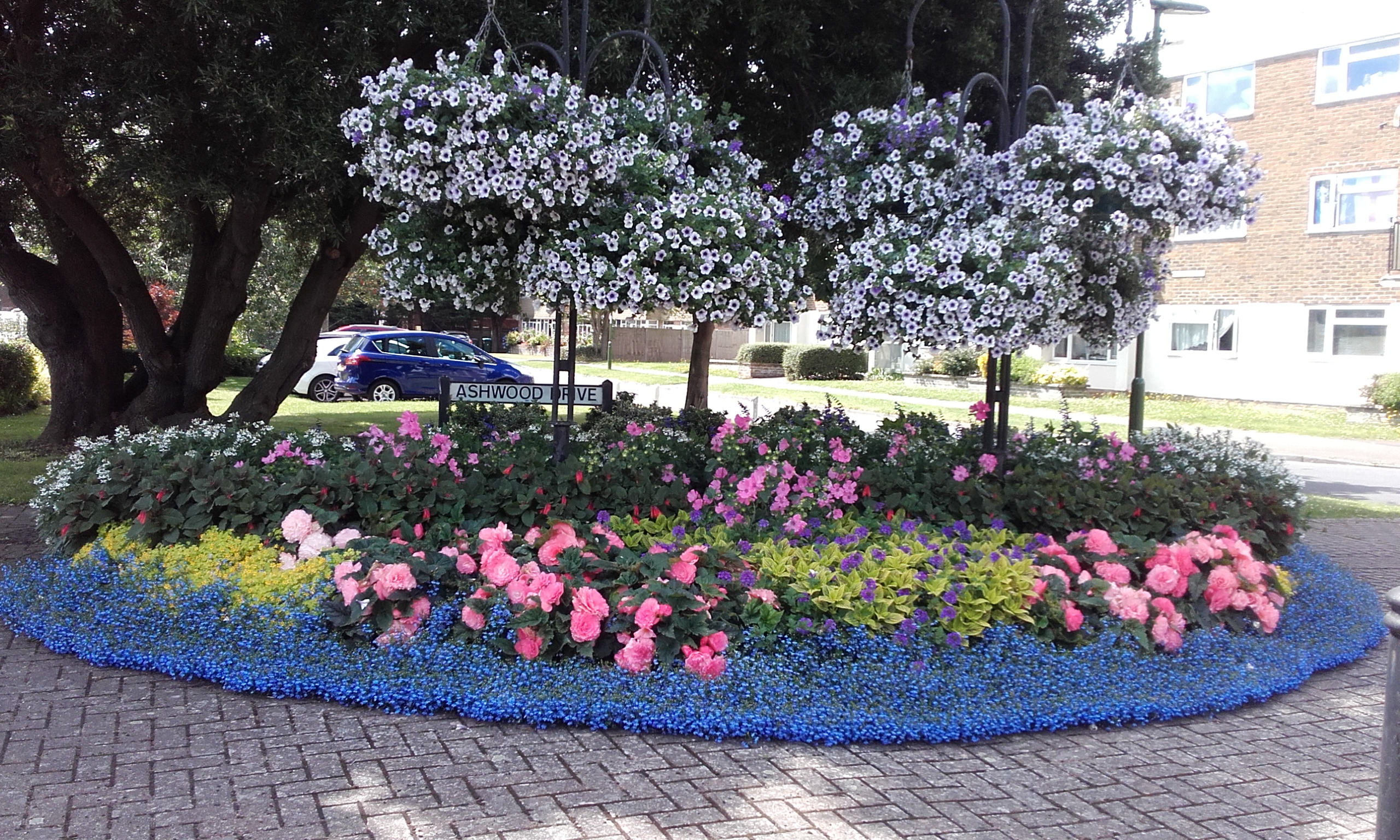 Rustington's In-Bloom journey began in 2004 when the Parish Council, in partnership with a small group of volunteers from various groups and organisations decided to enter the South and South East in-Bloom Competition.

The Village received a Bronze Award and this gave the encouragement and impetus for those involved to continue and extend the Campaign on a much wider and varied scale. An In-Bloom Committee consisting of members from the local community, with continued support of the Parish Council, was formed to take the lead.

The efforts of the Committee, together with the local community brought Rustington its first Gold Awards in 2007, not only for the Village entry but for the beautiful floral displays and the Woodlands Recreation Ground. With support from the Parish Council, the In-Bloom Committee decided to continue to enter the South and South East in-Bloom Competition in succeeding years as the members felt they could continue to engage more groups from the community including the local Primary Schools.

This local involvement has reflected the changes in the Competition with more emphasis being placed on community group involvement. The wonderful floral displays have, over the years, become more eye-catching and now extend beyond the Village Centre. Sustainable planting in some areas of the Village have replaced some of the seasonal bedding schemes.

This excellent high level of horticulture, regularly praised by judges, remains an integral part to the Competition. All these concerted efforts have resulted in Rustington continuing to achieve Gold Awards and Category Winner from that first Gold Award in 2007.

In 2009, the In-Bloom Committee accepted an invitation to enter Britain-in-Bloom. This was a much more challenging Competition and we were delighted when a Silver Gilt Award was given. Again, in 2011 an invitation to Britain-in-Bloom was accepted. In this Competition the In-Bloom Committee decided to focus more on sustainability, bio-diversity and the environment without losing sight of the other important activities which remain key to the Competition.

To the Committee's delight at the Awards Ceremony, the Village not only received a Gold Award but was Category winner too. The judges commented on the various community initiatives and what could be achieved by a community working together. They commented that they often saw the best of horticulture, but nothing could compare with Rustington - "a real gem".

To achieve these awards at this level of Competition brought a sense of great pride to the Village.

This was thought to be the end of our journey to Gold but, in 2012, a new challenge was presented to us, an invitation from the Royal Horticulture Society to enter Entente Florale Europe. It was received with mixed emotions, excitement and pride but also with a sense of trepidation as eleven other countries from Europe were involved. It proved to be extremely hard work but, we were well rewarded at a ceremony in Venlo (Netherlands), with a Gold Award.

Following many years of outstanding successes in the Competition, from gaining Gold and Category Winner to many awards for It's Your Neighbourhood entries and Primary School awards it was decided, in 2014, that the Village should be entered in a different Category, namely the 'Village/Town Centre'.

The Village Primary Schools have continued to be involved with In-Bloom, with their activities ranging from gardening, to using the beach as a teaching resource.

The "It's Your Neighbourhood" Category continues to have an impact not only on the lives of those involved, but on the lives of the people living in those areas, as not only is there an improvement in environment there is respect for the area with a reduction in anti-social behaviour.

Delight and lots of Rustington pride is also given to The Oak Community Project, a Project for adults with learning difficulties, which has continued for many years now, to be actively involved in not just the In-Bloom Campaign, but Village life in general. The penultimate accolade for the Project and its clients came when it won the special Lucija Cikes Award as the most outstanding Project of its kind across the entire 2012 Entente Florale Competition, for people with learning disabilities. This Award was only given at the Judges' discretion, and depended very much on the quality of the entrant.

The In-Bloom Committee decided, in 2020, to take a break from the South and South East in Bloom Competition, with the possibility of entering on a biannual basis in future years.  Unfortunately, the outbreak of the Covid 19 Pandemic, meant that the Village has not been entered in the Competition since, and is unlikely to be entering for the foreseeable future.

However, this doesn’t mean that the concept of Rustington in Bloom will not continue.  Ferring Nurseries, the Council’s Planting and Maintenance Contractor, will continue to ensure that the floral displays throughout the Village are always at the highest possible aesthetic standard and Barcombe Landscapes will continue to cut the grass verges in the centre of the Village on a regular basis.  The Parish Council will also undertake all necessary maintenance, with possible enhancements, of its Street Furniture, including Bus Shelters, Beach Shelter, Public Seats and Noticeboards, the War Memorial, Millennium Clock and surrounding area, to name just a few of the facilities it provides, for the benefit of the local community.

Whilst the Committee is no longer visibly or physically active, the existing Members continue to take a keen interest in everything ‘Bloom’ connected, and it is hoped that its resurrection as an active Committee will happen in the, not too distant future.  And, who knows, entry into the South and South East in Bloom Competition might then be considered again.

Where has the Village Clock gone?
24 November 2022