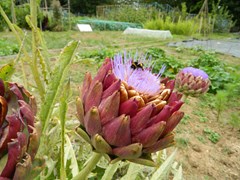 The Rustington Allotments Competition was recently judged by Members of the Council's Allotments Committee, and for your information, the declared results are as follows:-

The Cliff Pryor Cup is awarded to Mr B Cooper, of Plot Number 5 Penfold Lane, in recognition of his outstanding effort and achievement and for holding the longest Tenancy Agreement with the Council, for some 40 years.

The Owen Electrical Best Newcomer Trophy is awarded to Miss K Bunby in respect of Plot Number 2A Penfold Lane.

The Judges also agreed that Certificates of Commendation be awarded to deserving plots at the Penfold Lane and Conbar Avenue Sites.

CONGRATULATIONS to all of the winners!