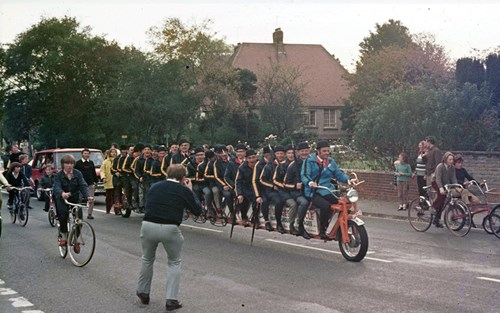 Picture: The Rotarians in Sea Lane, Rustington. Ronnie Barker is in seat number five, unfortunately looking the other way!

Rustington can claim a few other records, besides the Hot Cross Bun. Hopefully you will have seen the plaque on the sea front, alluding to the World Air Speed Records set along the coast here, in 1946, and again in 1953. The planes took off from RAF Tangmere, and flew fast and low along the coast, turning and flying back again. The timing posts to measure the speed were placed at Kingston Gorse and the greensward at the bottom of Sea Lane, and an average speed of 3 runs between the two posts was calculated to give the record.

In 1972, the Littlehampton Rotarians rode their world record bicycle through Rustington, as part of a 12 mile charity ride. It was a 35 ft long tandem, or Vigintipede, with seats for 21 people, and was featured on the children's television programme “Blue Peter”. The riders included Ronnie Barker, the actor and comedian, who had a house in Littlehampton, and they were raising funds for the National Lifeboat Institution.