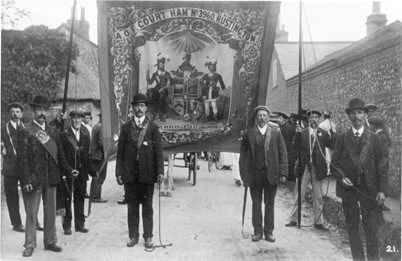 Rustington and East Preston Carnival c 1906 – 9.  The photograph was taken in East Preston.

Rustington has a long tradition of staging carnivals and processions. Some of the earliest were held to raise funds for the local hospitals in Worthing and Littlehampton. They were organised by the Friendly Societies, in particular the Ancient Order of Foresters, Court Ham, whose headquarters were at The Lamb Inn in Rustington. Originally only held in Rustington, in 1906, the route was extended to include East Preston, and later, Angmering, as many of the A.O.F. members were from the surrounding villages. The parades included many floats - decorated horse drawn carts, bicycles, even wheelbarrows, local bands, including Rustington Silver band, and people in fancy dress. The parades ceased during WW1, but began again in 1921, to a great fanfare, though they seem to have stopped by 1925.

The tradition was revived in the 1970s, and carnival day was a well-attended event until recent years, when the Street Fayre was successfully introduced, and continues to this day.