Harry Clark - A Life in PIctures 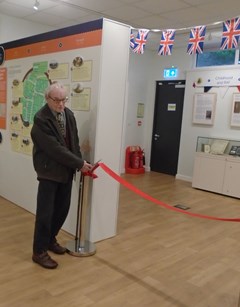 On Monday, 7 December, the latest temporary exhibition was officially opened at Rustington Museum. Harry Clark cut the ribbon to open the exhibition exploring his life. Harry has played an important part over the years in helping to promote and preserve the history of Rustington.

Born in Hastings in 1922, Harry and his family moved to Littlehampton when he was a youngster. He was employed by the West Sussex County Library Service straight from school, following his love of books and his experience in the school’s library. Called up to War Service in 1942, Harry joined the RAF, spending much time in India, still finding time for the camp’s libraries and even getting involved in amateur dramatics. After being de-mobbed he returned to work in the library service, becoming the first librarian in Rustington. There he stayed until his retirement.

He was also very active in the Rustington Heritage Association, after being introduced by local historian Mary Taylor. Harry took up the position of Chair of the Association in 1989, only stepping down in 2019 having served an incredible 30 years. His other interests include photography with the Littlehampton & District Camera Club and gardening.

The exhibition has on display memorabilia from his RAF days and his other hobbies. There is also a photography gallery, showcasing some of Harry’s collection and his photography skills. It will be on display until Spring 2021. The Museum will also be hosting a case that will feature a changing display of the organisations Harry has been involved in, such as the Littlehampton & District Camera Club and Rustington Heritage Association.

Rustington Museum is open Monday to Saturdays, 10am-4pm and admission is free. The Museum has the “Good to Go” mark, which ensures visitors that steps have been taken to provide a Covid-secure visit, with hand-sanitiser available and social distancing in place.

The Museum’s Facebook page is https://www.facebook.com/rustingtonmuseum where you can find information about Rustington’s famous residents and articles on items from the collection.