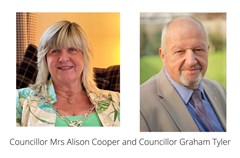 At the Annual Meeting of Rustington Parish Council on 23 May 2022,

Councillor Mrs Alison Cooper was, once again, elected as Chairman of the Council, for the 2022/2023 Civic Year.

Alison was first elected to the Parish Council in May 2013, and has lived in Rustington for over 45 years and is married to Andy. They have three children and have owned and run various retail businesses in the Village. Alison has always been active within the local community and is also an elected Arun District Councillor representing Rustington East Ward, as well as being a newly elected West Sussex County Councillor.

On being elected, Alison said: I am delighted to have been elected as Chairman of Rustington Parish Council for a fourth term in this special Jubilee year. I would like to thank my fellow Councillors for re-electing me. I look forward to continuing to work with the Vice-Chairman, Councillor Graham Tyler, as I already know that we make a great team to lead the Parish Council.

At the Annual Meeting of Rustington Parish Council on 23 May 2022,

Councillor Graham Tyler was, once again, elected as Vice-Chairman of the Council, for the 2022/2023 Civic Year.

Graham joined the Parish Council in 1996. He is married to Diane and they have three daughters and five grandchildren. They have lived in Rustington for over forty years.

On being elected, Graham said: It is an honour to have, once again, been elected by my fellow Councillors as Vice-Chairman of the Parish Council. I will, as always, continue to do my very best for the benefit of the Village and its Parishioners at all times.